Simulation And Reality
Physical reality does not require that we be pleased with its mechanism ― Kevin Michel, Moving Through Parallel Worlds To Achieve Your Dreams

Is the Universe we know the right one?

A classic analog computer manipulates contiguous variables, like a voltage. This is because of classic variables (e.g. velocity, volume or pressure) are contiguous, so to simulate them the computer has to be contiguous itself. A digital computer comes with discrete quantities, as the bits are discrete. A digital computer can handle continuous variables, but only after a discretization process. In a quantum computer, however, there is no distinction between analogy and digital computation. Quanta are discrete by definition, and their status can be directly mapped in the state of qubits without error of approximation. But the qubits are also continuous, because of their wave nature; their states can be an overlap continues. It follows that in a quantum computer, this distinction has no more reason to exist; no longer makes sense to speak of analog or digital. 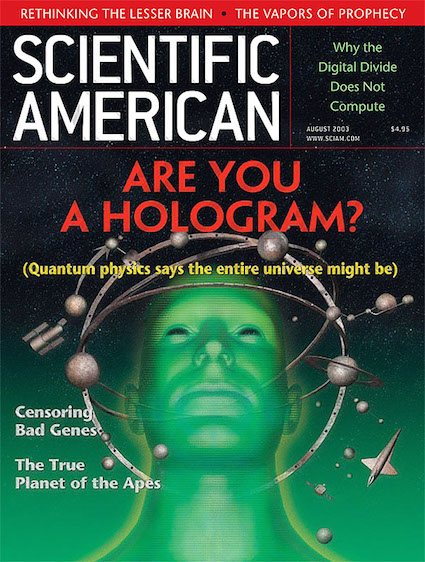 ######Are you a Hologram? (Credit: Scientific American)

The book is susceptible to 10000 interpretations. It starts with this quite ambiguous sentence:

The way can be Followed That is not the true way.

The Name That can be named is not the true name.

Laozi seems to suggest that by assigning a name to things, we introduce an artificial distinction that fails to capture entirety the Universe below. Let’s apply the Tao Te Ching to quantum mechanics. A quantum computer that simulates the universe will have exactly the same numbers of qubits that are in the Universe, and the operations of these qubits exactly simulate the dynamics of the Universe. This computer will be as Laplace’s demon, since he knows everything about the Universe, there are no mysteries for him. Such quantum computation constitutes a complete description of the nature, and therefore indistinguishable from the nature itself.

##Physical Limits to Computation Suppose that all the matter and energy present in our Universe is available for computing. How powerful could be the final computer?

As first thing, recall that energy limits the speed. The amount of energy in the Universe has been determined with a high degree of accuracy. We know that much of it is confined in the mass of the electrons. However, the density of the Universe is not particularly high: about one hydrogen atom per cubic meter. 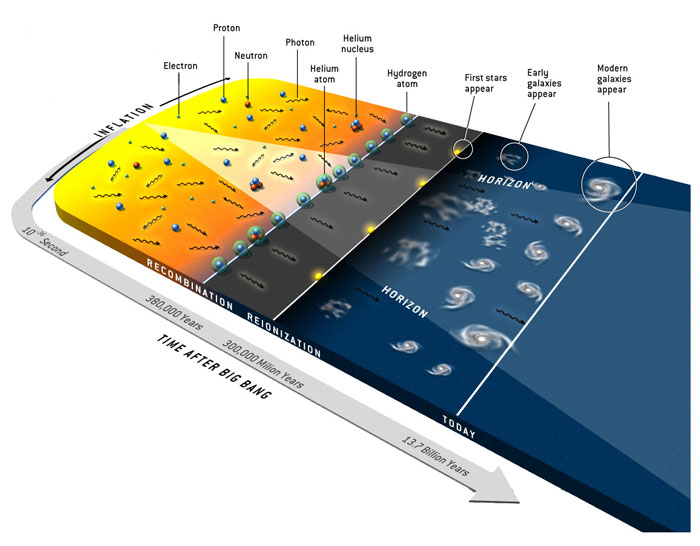 ######Timeline of the Universe (Credit: background.uchicago.edu)

Looking through a telescope we look in the past. As the horizon expands, more and more objects come in the visible range, and the amount of energy available for computation within the horizon increases. The horizon is 42 billion light years away.

The laws of physics dictate a fundamental limit on the speed of computation and the number of bits available. The computational speed is limited by the energy available, and the number of bits is limited by this energy and the size of the system that performs the computation. The computational power grows with time, because the horizon is expanding very quickly. Modern physics is based on the mechanistic model. In this paradigm, the main quantity is the energy. Think about the world not only as a machine but as a machine that processes information. In this paradigm, there are two primary quantities: energy and information.

They are on the same plane, and play a role with one another. It allows us to give new insight into the workings of the Universe.

First insight: think of the Universe in terms of information leads to the resolution of the problem of complexity, because of the nature is so complex.

Second insight: inquiries concerning the application on the shape of the universe in the earliest stages. In particular, quantum computation is a possible way to the quantum gravity.

The theory of general relativity takes account for the objects at very large scales. Quantum mechanics, however, takes into account the objects to atomic scales. But to give a complete view of the Universe. when it was still small and incredibly energetic, requires a theory that can unify general relativity and quantum mechanics, two theories that are undeniably useful monumental correct but that are fundamentally incompatible to the base.

##Quantum computing and quantum gravity To build a theory of quantum gravity by quantum computing, is necessary to show the way quantum computation includes the concept of space and time. The theory must be able to forecast, as well as must be able to demonstrate results already observed. General Relativity Theory is a theory of space, time and their interactions with matter. All possible configurations of space and time interacting with matter is called space-time.Our Universe is nothing but a particular space-time.

What happens to information in quantum computation is independent from the way quantum computing is built in space-time. The fact that quantum computation does not take into account how it is included into space-time, it means that space-time derived from quantum computing obeys the laws of general relativity. Why all this? Because of Einstein derived his laws of General Relativity requiring that these laws do not take account of how the dynamics underlying physics of matter were incorporated into space-time. Einstein’s equations relate the geometry of the space-time behavior and the matter in it. Geometry tells matter where to go, and matter tells geometry how to curve.