Bits Inside An Apple
What is immortal in humans is not their soul, but their ability to reason-Averroes

With this post I decided to publish some of my personal notes and reflections on Quantum Computing and the idea of a Computational Universe. A reader interested in this topic will find a good starting point reading the book Programming the Universe by Seth Lloyd, professor of mechanical engineering at the Massachusetts Institute of Technology, and in the articles Ultimate physical limits to computation and The Universe as Quantum Computer, written by the same author. For more insights, please consult the footnotes as usual.

Now try to extend this concept to every atom, molecule, bacteria, living organisms, star, planet and galaxy. Thus Seth Lloyd’s thesis consists in this different vision of every physical system and its dynamic. In particular, LLoyds states that the natural dynamic of each physical system can be thought of as a computation, in which a single bit not only stores a 0 or a 1, but also acts as if it were an instruction:

##Quantum Computing Quantum mechanics is the branch of Physics that studies the matter at very small scales. To make an analogy, quantum mechanics stand to atoms as classical mechanics stands to engines. Quantum Mechanics is notoriously strange. Waves which behave as particles, particles which behave like waves, objects that can be in two different places in the same time. Niels Bohr, one of the fathers of the quantum revolution, said that quantum mechanics makes you dizzy. Take a look at the articles What is real and A Nebulous Dragon and for a brief introduction of Quantum Mechanics and its implication on the interpretation of the Nature. 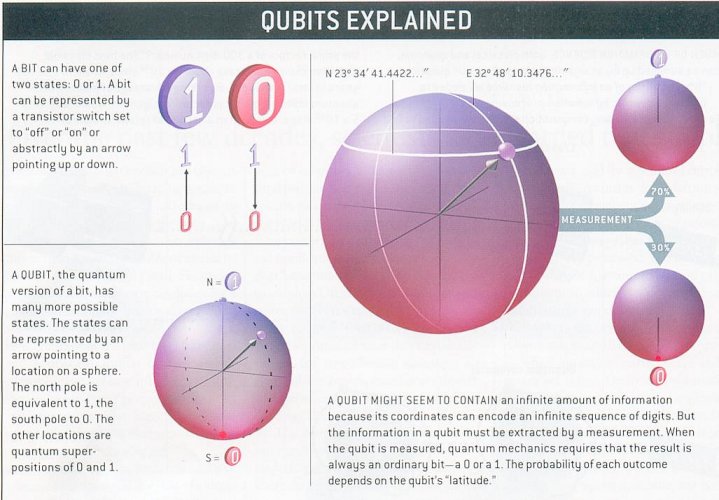 A quantum computer is the democracy of the information, since each element (atom, electron or photon) participates in a fair manner to the storage and processing of information. Historically, have been Paul Benioff, Richard Feynman and David Deutsch whom started to talk about Quantum Computers in the early ’80s. A quantum computer was a total abstraction, nobody had the slightest idea on how to build them.

Nowadays, quantum technologies allow to manipulate matter at the atomic scale, and quantum computers represents the last level of miniaturization. But remember that atoms are not the only ones able to record and process information. Photons (particles of light) and phonons (particles of sound), quantum dots (a sort of synthetic atoms), superconducting circuits, and all others microscopic systems are able to record information. Someone able to speak atoms’ language, will be also able to instruct them to process this information for him. A physical systems, in fact, speak a language whose grammar is the Laws of Physics.

##The role of the information in the Universe Answer a question like how much is generally easier than answering a question what it is. The abilities of the Universe to process information has grown through the centuries thanks to a series of information processing revolutions: creation of life, sexual reproduction, language, writing, printing and computing. Every atom, every single elementary particle records information. Each collisions between them, each dynamic change in the universe, no matter how small, processes this information.

The computational capacity of the Universe is subject to all subsequent revolutions on information processing. In a quantum computer, every atom records one bit. In the Universe, there are about 10 to the 90 particles. This means that is possible to assign a unique 300-bit long code to each particle.

For several centuries, philosophers have tried to understand what means the ‘meaning’, with fair results. The problem is that the meaning of a message depends a lot on how the information must be interpreted. For computers, this ambiguity is a bug. Instead for humans, this ambiguity is a bonus. Although the meaning is rather complicated to define, it is the most important characteristic of information.

What is the more generic definition that we can give to a computer? A machine for processing information seems to be the most common definition. However this is a fairly broad definition, since implies a lot of things can be a computer: DNA, our brain, the abacus, also our own fingers. Calculus is the Latin word for pebble; indeed the first computers were rocks. The Stonehenge were used to calculate the calendars and planets alignments. The invention of the abacus has been a revolution: a computer made of wood which incorporates a fundamental mathematical abstraction: the zero number. The word zero comes from Shunya, a sanskrit word which means an empty thing.

One of the greatest achievement in Computation History, obtained by the English mathematician George Boole, is the proof that any logical expression or computation can be encoded in a logic circuit. However, a rather counterintuitive result of the logic operations inside a computer, is that the computer’s behavior is unpredictable. In other words, the only way to know if the computer will give you an output when a computation starts, is to wait for it to finish (if it will end).

In 1930, the Austrian logician Kurt Gödel proved that any sufficiently powerful mathematical theory has predicates that, if false, would make the theory inconsistent, and that cannot be proven. Gödel’s incompleteness theorems have deep implications for various issues, like Pure Mathematics, Minds and machines.

Does the computer will stop or not? Or will it run forever?

Gödel proved that there is no automatic procedure to calculate an answer for these questions. The capacity of self-reference automatically leads to a paradox in the logic. In the same period, the British matematician Alan Turing proved that self-reference leads to non-computability in computers.

Because of computers possess both the reasoning and self-reference abilities, their actions are inherently inscrutable.